At 10am yesterday Shelagh, Steve and myself took off the Sydney airport runway and began our 4,900 kilometre journey to my first mystery location. If the hint I gave you the other day didn’t help out, then maybe this will.

It was a 9 hour and 15 minute flight, and as I felt the wheels of the plane the drop down, I gazed out the plane window to see huge thick clouds hovering not too far from the earth. Colourful blocks of housing encircled by thick mangles of trees were plonked throughout the land below. Tall grass stood still in the humid air outside the plane as the plane landed on the tarmac – very gracefully might I add.

As we hopped off the plane, I could see through the glass windows above and beside us, outside to the thick hot fog that awaited us outside. Intricate paintings were mounted on the walls, with different interpretations of Buddha – one of them was called ‘Journey Through The Universe’. A long walk through the airport took us to our baggage claim, but before we could be reunited with our luggage, a large line at the passport claim required a few minutes of our time.

We walked out to the arrivals gate, where a lady held a sign that read ‘Mr McGrath’s x 3’. As soon as she heard me shout out the sign and laugh, she signalled us over to follow her to the airport transfer waiting outside. The huge glass doors opened and the smell of hot corn soup greeted me with a harsh humid handshake.

It was roughly 4:30pm local time as our cab driver began weaving in and out of the traffic towards our hotel. With tolls at roughly $1AU, I began to feel a little jealous of the road system in this country. Not as many motorbikes shot past the window as I had expected, and cars weren’t piled up with bird cages or bags of rice like I had pictured.

By the time we got into our room, it would have been 9pm back at home. But that’s the beauty of travel, when you get to another country after 14 hours of being awake, and the sun is still up, you stay awake to see what the new city has to offer.

We still didn’t know how the money system worked, or how much money we were really spending. But we took a very short walk over to a small shopping centre by the river and grabbed some dinner. My first meal here was cashew nut chicken. And it was delicious.

As we sat by the water, two young girls dressed in golden robes with golden head gear sat down behind their instruments and whispered to one another beneath the music. On the river, party boats puttered down the river with music blaring from the speakers, trying to contend with the other boats going by.

Exhausted and sweaty, we went back to the hotel for a good nights sleep before our next big day.

PEEP AT DAY 2
As we sit in the hotel room around a map of the city, Dad says,
“So, where is our hotel?” 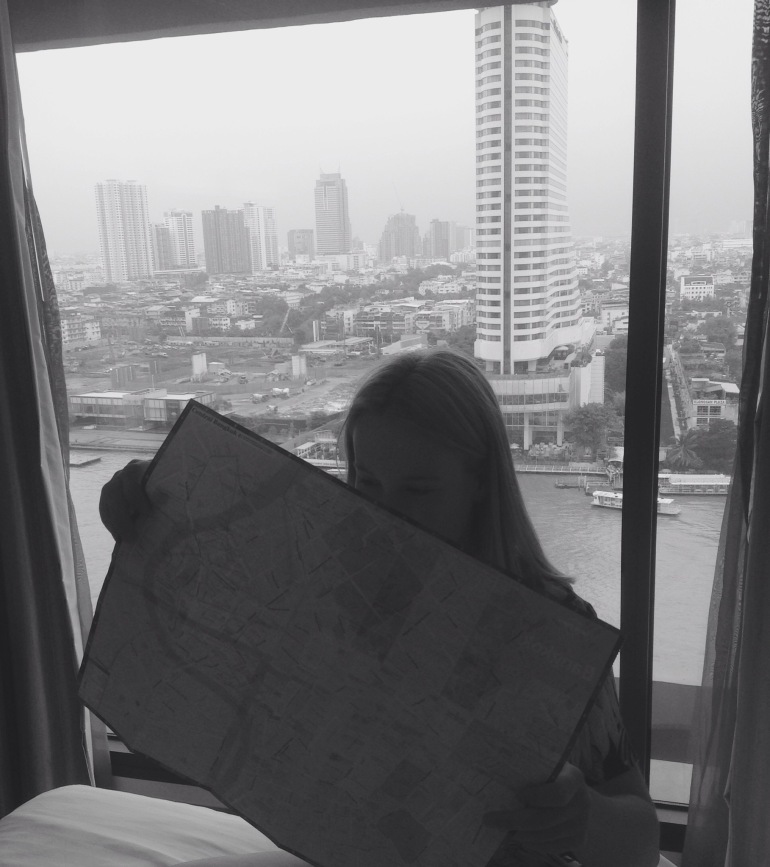